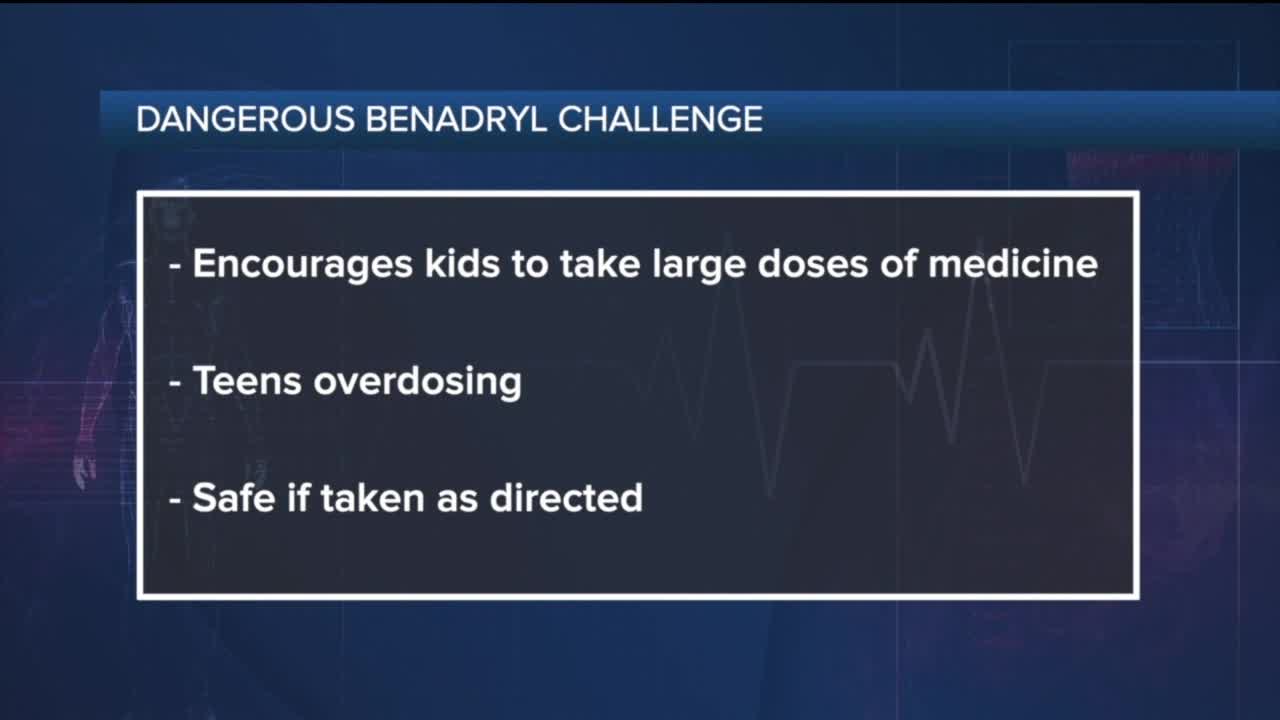 The U.S. Food and Drug Administration has issued a Health Alert about a dangerous challenge that has reportedly gone viral on the social media platform, TikTok.

(WXYZ) — The U.S. Food and Drug Administration has issued a Health Alert about a dangerous challenge that has reportedly gone viral on the social media platform, TikTok.

We hear about these challenges on social media every now and then. And, in most instances, the stunts are extremely dangerous. And, that’s the case with the so-called “Benadryl Challenge” that’s making the rounds on TikTok.

The Food and Drug Administration is investigating reports of teens overdosing on Benadryl and getting very sick or even dying, as a result of this latest social media challenge.

Benadryl is the brand name for Diphenhydramine. It’s an antihistamine used to treat runny noses, sneezing, hay fever, or the common cold. It is safe if taken as directed, but too much of the medication can lead to severe health issues, such as heart problems, seizures, and coma.

The FDA says teenagers are ending up in hospital emergency rooms after taking part in the challenge, which encourages viewers to take large doses of the medication to cause hallucinations.

The agency is doing a thorough investigation and monitoring whether any new cases are being reported.

There are a few things parents can do. First, you should store Benadryl and any other medications out of the reach of young children. It’s important to remember that Diphenhydramine is marketed under several store and generic brands, not just Benadryl. And, it’s found in other pain relievers and decongestants.

If you have teenagers, you can go a step further and lock up medicines. This is especially important during the pandemic when the kids are home more often and might be tempted to try something they shouldn’t.

There are a few steps being taken. The maker of Benadryl, Johnson and Johnson, has posted a warning about the challenge on its website.

TikTok says it is removing videos and posts about the Benadryl Challenge.

And, the FDA is getting the word out to healthcare professionals to make sure parents and guardians are aware of this dangerous trend.

So, my advice is to talk to your children about the serious side effects of all medications. They may think an over-the-counter drug like Benadryl is harmless, but they need to understand what can happen if it is used improperly.

If you’re looking to Super-Charge Your Health, then you’ll want to join Dr. Partha Nandi, MD this Sunday, September 27th at 1 pm for The Dr. Nandi Show. You’ll learn quick-fix-changes that will boost your energy, improve your mood and overall well-being! Guest Emily Fletcher once thought she was living the dream but stress ruled her life. Now she’s a true #HealthHero and demonstrates easy exercises and meditation techniques that will make you feel instantly calmer. Also, Feng Shui expert Ivy Ellerby shares how you can transform not just physical spaces but emotional ones too.